What is the CATCHING-UP REGIONS INITIATIVE? 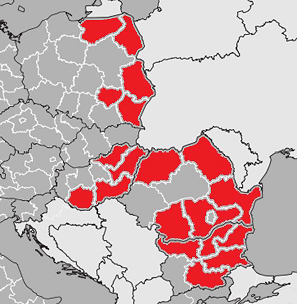 The Catching-up Regions Initiative was launched in 2015 by Corina Crețu, the Commissioner for Regional Policy (primirily under the name of Lagging Regions). Poland and Romania were the first countries to take part in the pilot phase of this initiative in 2016.

In Poland the Catching-up Regions Initiative is implemented by the European Commission, the World Bank and the Ministry of Development. Initially two regions were engaged: the Świętokrzyskie and Podkarpackie. Currently, also Małopolskie, Śląskie and Lubelskie Regions participate in the initiative. All projects implemented under the initiative have two modules: analytical and advisory/implementation ones.

In the first phase the Partners involved in the project define factors slowing down the developmental processes and specific measures to overcome it on the basis of to-date experience and already available data and analyses. The second phase is aimed at the implementation of proposed activities which will increase efficiency and effectiveness of cohesion policy tools for regional development. So for, both phases took one year, and the second one lasts much more longer.

Within the framework of the initiative, it is supervised by the Steering Committee holding regular meetings, which consists of the representatives of main institutions involved in work.